Warhammer 40,000: Dawn of War II – Retribution is the second and completely stand-alone expansion to Dawn of War II. It was developed by Relic Entertainment and released by THQ on March 1, 2011 in North America and March 4, 2011 in Europe, a year after Dawn of War II: Chaos Rising.

There was a Dawn of War II: Retribution multiplayer beta shortly before release (Jan 31 to Feb 24). The beta was invite only for a day, then open to official community members from Feb 1 and to Steam owners of previous Dawn of War games from Feb 7.

Dawn of War II: Retribution is a Dawn of War title that comes with multiple campaigns, offering one for each of the now six factions, the new one being the Imperial Guard.

Population resources familiar from multiplayer can be collected during missions.

The campaign length is 16 missions per faction; the corresponding missions are sometimes practically identical across different campaigns, however.

The heroes level up as before, but the maximum level cap is now 10. The player can pick a new trait each level, however, instead of distributing skill points that only increase a stat.

The multiplayer unit lineup is as follows:

The Imperial Guard faction is generally designed towards defensive play, although they have good offensive potential as well (possessing the only T1 vehicle and the strongest T3 tanks in the game). Some of their special features are:

The four heroes in the Imperial Guard campaign are:

Retribution kicks off 10 years after the events of Chaos Rising. Gabriel Angelos and the Blood Ravens have been branded renegades by their Chapter Master, Azariah Kyras, and have been forced into hiding. The Imperium has deemed the corruption of Sub-Sector Aurelia to be too extreme, and has sent the Ordo Malleus to deliver the ultimate sanction: Exterminatus.

Additionally, there are six pre-order Race Packs available. Players placing a pre-order may choose one, and it has been stated by Relic that the others will be available as paid DLC later. Each Race Pack includes a piece of alternative cover art for the game and four exclusive campaign items. 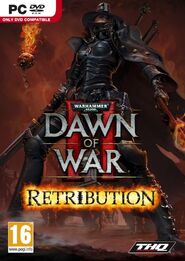 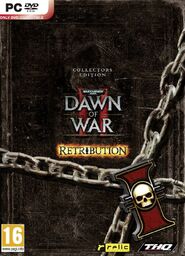 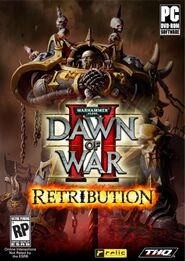 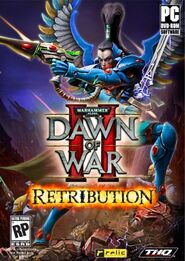 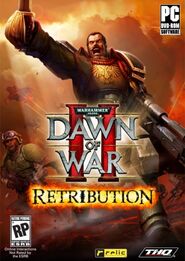 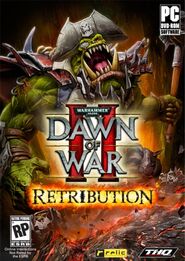 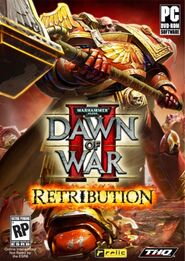 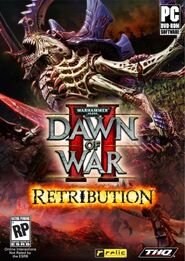 Space Marines gameplay
Add a photo to this gallery

Retrieved from "https://dow.fandom.com/wiki/Warhammer_40,000:_Dawn_of_War_II_–_Retribution?oldid=39811"
Community content is available under CC-BY-SA unless otherwise noted.