Dawn of War Wiki
Register
Don't have an account?
Sign In
Advertisement
in: The Last Stand heroes

< The Last Stand
Edit
watch 01:36
We're Getting Mutants in the MCU - The Loop
Do you like this video?
Play Sound

The Tau Commander is an offensively potent hero but can only fire at range and is vulnerable in melee. If an enemy attacks the Commander in melee he will fight back, but deal zero damage. To compensate for this large weakness, the Commander always carries a jump ability called ‘Jet.’ In addition the Commander will always have the ‘Unshakable’ trait.

The Tau Commander’s armor pieces have lower than normal armor values which can be compensated for by adding a shield. After unlocking one of the Commander’s achievements players may twinlink their weapons in place of a shield. This makes the Commander more offensively potent but limits his survivability. 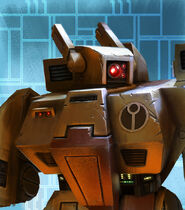