Dawn of War Wiki
Register
Don't have an account?
Sign In
Advertisement
in: Dawn of War III units, Characters

Solaria is one of the Space Marine’s new Super Units. She is also the head of House Varlock, the staunch defenders of the planet Cyprus Ultima. Fierce and stubborn, she can be an invaluable ally in the heat of battle or a devastating enemy.

Powered by pilots, Imperial Knights are ancient battlesuits that tower over friend and foe alike. Standing up to forty feet tall, these combatants are monstrous enough to be outfitted with Titan-class weaponry, such as the Ironstorm missile pod and Avenger Gatling Cannon.

Lady Solaria brings her looming Imperial Knight, Drakaina, to support the forces of the Blood Ravens. Unleashing screen-shaking assaults from her twin Gatling cannons, she is the terror of all those who would stand against the Space Marines. In case enemies rush her in close range she has a flamethrower on each arm as well.

Gatling Barrage
Solaria sweeps the Imperial Knight’s twin cannons, peppering the battlefield in a 90-degree arc in front of her.
Ironstorm Missiles
Solaria picks up to six locations, hammering the ground with potent missiles. Stacking the missiles on a single area deals massive damage.

Solaria's Presence - Inferno Missiles (Initial Doctrine)
While Solaria is summoned Whirlwind missiles leave a pool of fire where they explode, causing damage over time.
Solaria's Command - Fire on Move (Unlockable Doctrine)
While Solaria is summoned Tactical Marine squads equipped with bolters can fire on the move but do so less rapidly than while stationary. Unlockable as a full Doctrine.

Solaria is a late-game ranged powerhouse. Effective against armored targets, buildings, and massed infantry, Solaria is a destructive force that leaves only gore-drenched carnage in her wake.

Due to her size, it takes Solaria longer to get out of the way of incoming attacks making her. a priority target for high-damage, slow-moving abilities that other units would be capable of dodging. This also means she has less maneuverability when retreating from fights, making her especially vulnerable during a disengage. In general, she is weak to melee assaults, especially given that her Avenger Gatling cannons have a minimum range of use.

Despite these liabilities, Lady Solaria is a powerful presence on the battleground. She doesn’t need to be in the thick of the battle to be impactful. With her Ironstorm Missiles, in particular, Solaria can change the outcome of a battle. Casting less than the full amount of missiles will reduce the ability’s cooldown, and can also be the preferred strategy when you’d rather hinder your enemy’s movement than stand and fight. You can also pretend to cast Ironstorm Missiles but cancel the order before it fires in an attempt to bait your opponents into using their abilities.

After firing for an extended period of time, Solaria goes into overheat mode. While overheated, Gatling Barrage knocks enemies back and Ironstorm Missiles slow enemies that it hits. Using these abilities together, it’s possible to slow enemies with your missiles and then barrage them into oblivion. 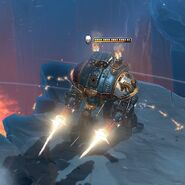