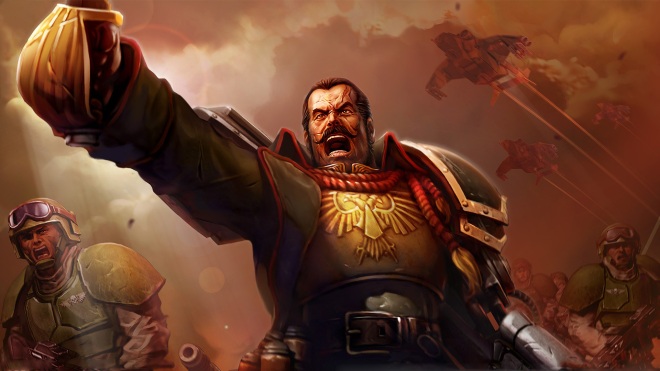 “I’ll toughen you up, or use you up. Perhaps both, as the Imperium requires.”
— Lord General Castor

The Imperial Guard is the new race being introduced in Dawn of War II: Retribution, but their increased presence in Sub-Sector Aurelia comes amidst a great deal of danger. Daemonic incursions, the continued presence of Xenos filth, renegade guardsmen, and now accusations that the Chapter Master of the Blood Ravens is under some kind of influence from the Warp. Things have to be set right, one way or the other, and it is fresh eyes that are free from the corruption in Sub-Sector Aurelia that are going to make the assessment at the request of Gabriel Angelos. So enter Lord General Castor of the Imperial Guard and Inquisitor Adrastia into the maelstrom.

The start of the Imperial Guard campaign in Dawn of War II: Retribution opens with Inquisitor Adrastia and Lord General Castor beginning their mission in a subtle fashion. They are gathering intelligence on Typhon and looking to recruit further assistance from the guardsmen there. There is little time to waste however, the investigation of the Blood Ravens Chapter Master must be concluded before the arrival of the full weight of the Inquisition.

Retrieved from "https://dow.fandom.com/wiki/Retribution/Imperial_Guard_Campaign?oldid=26057"
Community content is available under CC-BY-SA unless otherwise noted.