Chaos Heretics (simply "tics" in online shorthand) are corrupted humans serving the ruinous powers of Chaos alongside Chaos Space Marines and Chaos Daemons. A squad of Heretics serves as the Chaos starting unit in Dawn of War II: Retribution multiplayer.

Effective use of Chaos Heretics and the Worship ability is central to the entire Chaos faction, which relies heavily on Tier 2 and especially the daemonic units (Bloodcrusher and Bloodletters) that gain extra benefits from Worship.

There are three versions of the Worship ability, determined on which Chaos hero you choose: 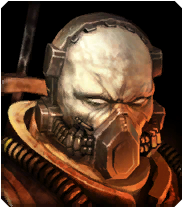 Heretics using Worship on a shrine of Khorne
Add a photo to this gallery
Retrieved from "https://dow.fandom.com/wiki/Retribution/Chaos_Heretics?oldid=35631"
Community content is available under CC-BY-SA unless otherwise noted.