Martellus is a Techmarine serving with the Blood Ravens 4th Company. He appears as a non-playable support character in Dawn of War II and Chaos Rising, and one of the playable heroes in Retribution.

Martellus served with the Force Commander throughout the Tyranid invasion of sub-sector Aurelia. During the climactic battle over Typhon Primaris, Martellus was aboard a Thunderhawk gunship supporting the Blood Ravens ground forces. The Tyranid fleet eventually overwhelmed the gunship, forcing it to crash-land, and Martellus was assumed to be lost to the Chapter.

Unknown to the Chapter, Martellus had survived the crash, rendered immobile and without means of communication. Over the course of several months Martellus was able to repair himself enough to restore mobility. However, he was stranded alone in the jungles of Typhon, still infested with feral Tyranids.

If none of player's squads are corrupted then Martellus will be revealed as the traitor leaking Chapter secrets to the Black Legion. After the crash of his Thunderhawk, Martellus had felt abandoned and betrayed, as the Chapter had assumed he did not survive the crash. Eliphas took advantage of the situation and helped Martellus, persuading him to join the Black Legion to take revenge on his brothers. Martellus later managed to expose himself as the traitor and escape to planet Aurelia at the same time, and the Force Commander led a mission to execute the traitorous Techmarine. Martellus appeared in a heavily modified and extremely powerful Chaos Predator. Martellus could be considered the hardest Traitor to get, as it requires all squads to be completely pure, meaning all objectives that cause Corruption must be avoided and those that give Purity must be completed.

Martellus appears in Retribution as a hero under the player's command. He accompanies Diomedes throughout the campaign, and is particularly important due to his skills as a Techmarine, which allowed the Blood Ravens to use the Teleportarium system in their covert mission. 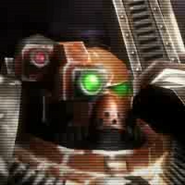 Martellus in Dawn of War II

Martellus in Retribution
Add a photo to this gallery
Retrieved from "https://dow.fandom.com/wiki/Martellus?oldid=35185"
Community content is available under CC-BY-SA unless otherwise noted.