Dawn of War Wiki
Register
Don't have an account?
Sign In
Advertisement
in: Dawn of War characters, Dawn of War III units

Macha is an Eldar Farseer of the Biel-Tan Craftworld. She leads the Eldar forces deployed on Tartarus during Warhammer 40,000: Dawn of War.

Macha is introduced as an antagonist. She leads a Biel-Tan strike force or "Swordwind" tasked with guarding the Maledictum from being unveiled again.

After a failed ambush against the Space Marines to snuff out Imperial presence quickly, Macha then deploys another trap along with her warhost to swiftly eliminate the Space Marines, which was ultimately foiled by Captain Gabriel Angelos, costing the Swordwind heavy casualties.

After being forced to retreat to a ruined city to prepare for another battle with the Blood Ravens with the Avatar of Khaine in their side, Macha then orders every of her Warhost to fight the Space Marines until the last.

This also fails, however, as the Blood Ravens managed to crush their defenses and finally reach a mysterious Key (that Macha and her Warhost were protecting) that has the power to open the seal holding the Maledictum. While Librarian Isador refrains from listening to Sindri Myr's whispers (which were enough to distract him to detect Sindri), the latter used the moment to escape with the Key. Angelos then interrogated Macha on what was the Key used for, but she ends up saying nothing, telling them that Inquisitor Mordecai Toth has knowledge regarding the key, and leaves to rally what is left of her warband, who are now, due to the Space Marines, eventually too weak to confront Chaos.

Afterwards, she begged Angelos not to destroy the Maledictum, telling him that he doesn't know what he's doing, but Toth objects against Macha, ordering a hesitant Angelos to destroy it before it could drive more Imperials to insanity. Unable to convince Angelos further, Macha orders him eliminated, starting a firefight between the Blood Ravens and the Swordwind, but ultimately, Gabriel (unwittingly) destroys the Maledictum, causing Macha and her Warhost to retreat, cursing at Angelos for dooming them all. 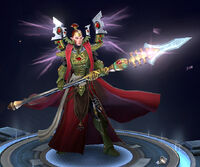 Macha is an Eldar Farseer, a powerful psyker able to read the future. A veteran of countless battles, she serves on the Biel-Tan Craftworld, striving to find a way to avert the extinction of her people. Macha is distrustful of promises of a brighter future, however, and fears her people are being led astray.

She redebuted (her first debut since the first Dawn of War) in the game, having been tasked by Autarch Kyre to dispatch the Ork threat in Cyprus Ultima. She successfully does so with a larger warhost. There, she encounters Warboss Gitstompa with a huge cannon and a warband in his side (but Gorgutz eventually betrays him by destroying the cannon and some Ork Boyz nearby and declares his affiliation with Gitstompa over). Macha finds out about this betrayal and destroys Gitstompa and his warband with the aid of her warhost. Afterwards, she anticipates that after what has happened, Gorgutz would surely replace Gitstompa as the new Warboss.

She led the Swordwind to assault the main Blood Raven stronghold (in retaliaition against the Space Marines for her failure to defend the Maledictum), where they sabotaged the Space Marine's security system and hacked into their network to locate Gabriel Angelos (who Macha blamed for the failure she and her warhost suffered in Tartarus). Afterwards, Macha and her Eldar warhost then eventually crushed their defenses, defeating Chief Libriarian Jonah Orion in combat. Macha then briefly interrogated Jonah on Gabriel's whereabouts until the latter showed up surprisingly. Just as about the two were about to fight, Macha senses a darker vision, and spares Gabriel and what's left of his battle brothers (even Jonah himself), to the Chapter Master's surprise.

Macha and Ronahn then attempted to get Warboss Gorgutz 'Ead'Unter's attention by destroying his main stronghold and any obstructing Orks under Gorgutz's command, with great success. While meeting with the gigantic Warboss, Macha promised that she would bring Gorgutz a more bigger battle to fight and leaves Ronahn to lead Gorgutz to a heavily guarded path leading straight into the Vault.

Macha and her warhost then eventually used this as a distraction to grab Taldeer out of Kyre's custody, and with a growing group of sympatyzers that joined Macha, then successfully caught Taldeer's Soul Stone, and manages to escape with her warhost against Kyre's search parties and Gorgutz's Orks.

The Farseer regrouped with Ronahn and attempted to leave Kyre, who tries to reason with Macha that the Spear of Khaine could be an instrument of power and could be used to kill the awakened Daemon which the Farseer rebuffs, and ends up declaring rebellion against Kyre, stating that continuing the battle over the Spear will fasten the Daemon's awakening. The Autarch, disappointed with Macha's decision, then orders his warband to kill her.

While attempting to destroy the Disrupter Generators blocking the Colussus Gateway, Macha then discovers two husks of Wraithknights (one destroyed and one intact), and as one living and one dead Eldar could pilot the gigantic walker, attempts to persuade Ronahn into doing so, but he objects, not wanting Taldeer to risk her life again (eventually remembering Kronus). Despite Ronahn's objections, he recluctantly does so since it is Taldeer's wish, not his.

With this newfound walker now on Macha's side, some of Kyre's forces wonder if Macha was right about what transpires and her Warhost manages to destroy the last Disruptor Generator. As a last resort to trap Macha and her warhost, Kyre orders the Colussus Gateway destroyed, but eventually Macha and her rebels made it in time to save the Gateway. Realizing that they are now outnumbered, Macha and her warhost retreated to the damaged Gateway.

Macha shares a vision with Taldeer, that the latter asks that she kills the Daemon, but must not do it alone. Macha realizes that she must get the help of both the Orks and the Space Marines to defeat the Storm Prince.

To ensure that the Daemon uprising is short-lived. Macha, after claiming the Nexus structure against an army of dopplegangers and daemons with a small warhost, then contacts Gorgutz, tasking him to destroy four Dark Spires that blocks her ability to teleport into the Void after reminding him of her promise to give him a bigger challenge to fight. She then contacted Gabriel into crashing his Strike Cruiser, Dauntless into Acheron to weaken the Daemon. The Chapter Master does so by securing and holding five Listening Posts used as a target beacon.

Macha suggested to Gabriel and Gorgutz that they form a temporary alliance, in which both agreed, but Gabriel agrees on the alliance to only kill the Daemon. After cutting through an army of dopplegangers and daemons, the trio then faces the Daemon in combat. After a long and brutal melee, they manage to kill the Daemon, and the trio ended their alliance and departed warily.

Macha focuses in ranged combat and support, though she is slightly effective in melee. She can't jump or teleport, but compensates for this with powerful psychic powers that are useful in ranged support. Most of her abilities can be useful in turning the tide of war in the Eldar favor (if she is likely deployed). In general she is a bit of a more fragile Elite unit and should avoid heavy combat when possible, especially against Walkers.

Macha throws her Singing Spear to a target position, damaging and knocking back enemies along its path. The spear remains where it lands, increasing the damage of nearby allies. While the spear is embedded Macha will resort to hand-to-hand combat in melee which does less damage. Toggling the ability again returns the spear, and it can do damage again in its flight.

Macha emits a blast of psychic energy around her spear, damaging nearby enemies. If carrying her spear, her attack damage is increased while incoming damage is reduced temporarily. If planted, it creates an aura that grants these buffs to nearby allies.

Macha channels a temporal field around herself. Enemies within the area are put into stasis, rendering them invulnerable, untargetable and unable to act. If her spear is planted, Macha will instead create a temporal wall from herself to the spear. The ability is cancelled if she is given a movement or attack command.