Jonah Orion is a powerful psyker, able to use psychic tomes and relics to wield a variety of combat abilities. With the right traits and equipment, he can be effective in almost any battlefield role.

The Space Marines psykers known as Librarians are able to manipulate the fabric of the Warp itself. They are both powerful warriors and lore keepers for their chapters.

Jonah Orion has served under Gabriel Angelos since the aftermath of the Tartarus campaign. During the Tyranid invasion, he was one of the psykers tasked with battling the mighty Hive Mind as Captain Angelos made for sub-sector Aurelia.

Of the dozen Librarians, Navigators and Astropaths accompanying Angelos, only Jonah survived.

Depending on the player's choices and deeds during the missions, as well as choices of wargear, Jonah could be revealed as the traitor. This reveals that during the final battle against the Hive Mind, Jonah was weakened enough for a daemon to possess him, despite the protection provided by his wargear after that it was a downhill battle, and eventually the daemon succeeded in possessing Jonah's body. Shortly afterwards, the Force Commander led his remaining squads in a mission to kill the daemon and free Jonah.

Jonah Orion returned to the side of Gabriel Angelos after the events of Chaos Rising, apparently serving as his primary advisor. During the events of Retribution, Jonah followed Gabriel in his ill-fated attempt at defeating the daemon prince Kyras, becoming grievously wounded in the process but miraculously survived. 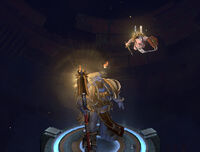 Jonah Orion is the Blood Raven's Chief Librarian and a man of fearsome psychic power. Focused on supporting his brethren, he is a flexible Elite who amplifies the effectiveness of his allies.

Although he sustained what many thought was a mortal wound on Cyrene, he miraculously survived. Understanding the gravity of Jonah’s sacrifices for the Chapter and his undeniable role in their victory against Arch-Traitor Azariah Kyras, the newly appointed Chapter Master Gabriel Angelos promoted him to Chief Librarian.

Zeal (Passive)
A charge is granted every time Jonah uses an ability. Each charge decreases his time between attacks by 0.5 seconds. Charges decay every 10 seconds.
Fury of the Ancients
Jonah channels his psychic power through his cherub-familiar, dealing damage to enemies and temporarily boosting the speed of allies.
Emperor's Light
Jonah calls forth an expanding field of light that increases the damage of allies while disabling enemy attacks and vision. Allied damage Buff lasts 8 seconds inside Stonewall, and 10 seconds outside of Stonewall.
Stonewall
Jonah reshapes the earth and erects a ring of impassable barriers around himself that absorb all incoming and outgoing fire.

Fury of the Ancients

Jonah Orion's Presence - Standard Stonewall (Initial Doctrine)
While Jonah is deployed the Standard deploys a barrier in a circle around itself. Blocks movement and absorbs shots that pass through it
Jonah Orion's Command - Blind Grenades (Unlockable Doctrine)
Scout grenades Blind and Silence the enemy for a duration, and that duration increases as you Tier Up. At level 8 it unlocks as a full Doctrine.

The Chief Librarian’s abilities interact in a couple of different ways. Casting Fury of the Ancients inside of Stonewall will cause it to fill the area instead of casting in a line. Using this combo, Jonah is great at trapping enemies and dealing considerable damage. Casting Emperor’s Light inside of Stonewall will make Emperor’s Light last longer. "Stonewall can block off escape routes, lay traps, and set up other abilities."

Stonewall can block off escape routes, lay traps, and set up other abilities. It also makes for a great escape tool, as Jonah can use it to block incoming damage and use Fury of the Ancients to speed his allies out of harm’s way.

Jonah can be countered by skimmer units such as Land Speeders since they can chase him down quite easily. Units that can jump or teleport are able to infiltrate Stonewall, so you’ll need to be careful about when you use it. Similarly, artillery barrages aren’t blocked by Stonewall, so make sure you don’t accidentally lock your allies in the midst of enemy fire.