Dawn of War Wiki
Register
Don't have an account?
Sign In
Advertisement
in: Dawn of War III units

Also known as the Storm of Silence, Jain Zar is the Phoenix Lord of the Howling Banshees. 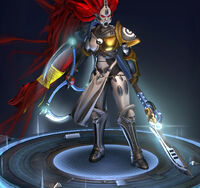 Jain Zar is one of the most fabled Eldar in recent times. Born amidst the Fall of the Eldar, much of her early years were spent roaming the galaxy in search of survivors. As a young child, she was named Faraethil and somehow managed to survive the Fall of the Eldar on their home-worlds. She was originally a Wych gladiator involved with Dark Eldar survivors. Disgusted by the pointless slaughter for the amusement of her leaders, she fled and tried to live on her own. While trying to survive, she found another fellow survivor and saved him from certain death. This survivor, named Iliathin, became known as Asurmen, the first of the Phoenix Lords. Afterwards, they would leave the dead world they lived on and settled on a moon they named Asur, from which the Aspect Warriors were born. Among others, Asurmen mentored Jain Zar, who was his first student. In time, she herself became a Phoenix Lord and roamed the stars - building Howling Banshee shrines among the Craftworlds of her people.

When a Phoenix Lord dies, their mightiest Exarch steps into their armour. Doing so infuses their spirit within the armour’s spirit stone. This process reincarnates Jain Zar, consuming the soul of the Exarch who brought her back and merging them into a gestalt of countless lives embedded in her armor's spirit stones. In essence, Jain Zar has lived many times over, and the whispers that she is emerging once more have proven to be true.

Increased speed and Battle Focus regeneration within the psychic radius of a Webway Gate.

When charging into melee, Jain Zar lets out a psychosonic scream, slowing enemies around her.

Jain Zar throws her Triskele in a direction, dealing damage to all enemies in its path. It returns like a boomerang.

Jain Zar will dash to the target position. If any enemies are in her path, she will leap over them and do damage in an area.

In Dawn of War III, Jain Zar is a fiercely powerful melee Elite who boasts high mobility and damage. Using Dash, she can quickly get out of harm’s way or jump into a fight. Dashing into enemies will launch her into the air, doing damage in an area at the start of her jump and again when she lands. Silent Death is great for picking off enemies from afar, but she can also use it to launch into the air by comboing with her Dash. This way, she can escape enemy units without having to run towards them.

As with most melee units, Jain Zar can be stunned or slowed to halt her escape plans. Units such as Sniper Scouts will quickly break through her shields. If you build up Heavy Bolter Devastators, you can keep her constantly slowed. Units with powerful melee capabilities, such as Dreadnoughts, will also prove very difficult for her to deal with.

An early-game Elite, Jain Zar is fantastic at picking off targets and quickly retreating to safety. A low health pool means she can’t engage larger armies without backup, but her Dash is a versatile ability that can be used to escape unfavourable fights or pounce on advantageous ones.