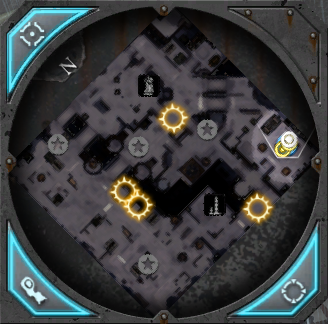 In this mission you have to take out at least a Fire Prism boss and a Falcon, as well as a load of Eldar structures (Webway Gates and Warp Generators). Bringing Avitus with a missile launcher helps, but is not mandatory if you have melta bombs and a power weapon or two. Cyrus with a sniper rifle is helpful in taking out suppression platforms (High-Powered Shot) and stealth-bombing the structures.

You should start by clearing out the eastern encampments (the two objective markers far apart) as Webway Gates in these locations will push out infinite Eldar troops. Going through the markers in a clockwise direction is OK, as taking the Foundry is recommended anyway.

Be wary of Eldar ranged firepower – use cover and frag/blind grenades. Snipe off Rangers and Shuriken Cannon Platforms from afar. Luckily, the gates and generators are very vulnerable to explosives and can be taken out even with a normal frag grenade. There is a Falcon west of the Automated Foundry that you may be able to bomb over the wall with frag grenades and/or demo charges without confronting it directly.

The Fire Prism boss is at the southern of the two objective markers close to each other. It may be easier to approach from south, as the tank can be drawn away without the heavy infantry support (Warp Spiders and Howling Banshees) in the area. The tank will cause extreme ranged damage and can kill a whole squad with one shot. Use the Rosarius to approach so you can stun it with a power fist and/or melta bomb it. The tank has low health and will actually die easily if you can survive the approachal.

With the tank gone, mopping up the rest is straightforward. You can visit the northwest corner and the Shrine area for wargear and support items (to keep Cyrus sniping platforms and bombing structures).

Retrieved from "https://dow.fandom.com/wiki/Fire_Prism_Assault?oldid=10957"
Community content is available under CC-BY-SA unless otherwise noted.