Dawn of War Wiki
Register
Don't have an account?
Sign In
Advertisement
in: Dawn of War III races

< Dawn of War III
Edit
watch 01:36
We're Getting Mutants in the MCU - The Loop
Do you like this video?
Play Sound

Space Marines are genetically engineered warriors on a mission to protect mankind from the gravest of threats across the galaxy.

Armed with a vast selection of iconic weaponry, clad in suits of intimidating power armour and borne to war aboard deadly vehicles, they are the greatest warriors the galaxy has ever known. They operate as an elite, single-minded strike force.

Even with the lower numbers on the front lines, they are a force to be reckoned with.

In general the Space Marines of DOW III are an efficient, adaptable faction. From front-line slugfests to hit-and-run raiding, infantry and vehicle combat, sneaky scouting and artillery strikes, the Space Marines have a spread of units that make them capable in the widest variety of situations compared to the Orks and Eldar. If as the Space Marines you can predict what you will face and build accordingly, you should come out victorious. 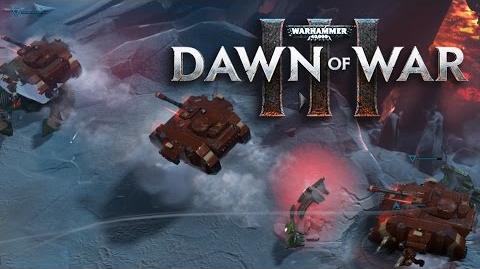