Azariah Kyras was the Chapter Master and Chief Librarian of the Blood Ravens at the time of the Dawn of War series up to the latest installation, Dawn of War II: Retribution. He shares the same first name with Azariah Vidya, the first known leader of the Chapter, but is not to be confused with this ancestor.

Not much is revealed about Kyras until the events in Dawn of War II: Chaos Rising. It is known that he was a Librarian of the Epistolary rank and the apprentice of Chapter Master Moriah approximately 1,000 years before the Aurelian Crusade. At that time, planet Aurelia the capital world of the sub-sector forming the Blood Ravens recruiting worlds, was pushed out of orbit by a Warp storm and turned into an icy hell, while a greater daemon of Nurgle by the name of Ulkair also manifested on it. When the Chapter responded, Moriah wounded Ulkair deeply and although he perished himself, his apprentice managed to imprison the Daemon. Kyras, however, was stranded upon Aurelia, which was swallowed by the Warp completely and disappeared from real space.

Several centuries later, the battered remnants of the Blood Ravens 5th Company was stranded aboard a space hulk periodically appearing within sub-sector Aurelia, the Judgment of Carrion, during an exploration mission. The survivors, led by Apothecary Galan, were upon the brink of desperation when Azariah Kyras inexplicably appeared before them on the hulk. He had been somehow cast on the Space Hulk by Ulkair just as he sealed the daemon, his fate unknown because of Aurelia disappearing completely. Kyras aided the survivors, but did nothing to encourage his brothers, in fact fueling their desperation with depressing stories such as the loss of Moriah. Nevertheless, the Blood Ravens eventually escaped the derelict under the guidance of Kyras and Galan.

The return of Kyras was celebrated in the Chapter, although Gabriel Angelos and some others saw it as a bad omen. Kyras soon climbed through the Librarian ranks and was eventually appointed as Chief Librarian and Chapter Master both – a very rare position. Galan was appointed to the Honor Guard by Kyras.

"I, Epistolary Kyras of the Blood Ravens, do bind the daemon Kankeiros into the body of my brother Galan. In so doing I damn my brother's soul and give it unto Ulkair, who is master of Kankeiros. I do so freely as my part in a bargain with that selfsame archfiend. Through him shall we gain release from the confines of this derelict. Let all who gaze upon this text know the power of the Great Unclean One Ulkair."

Kyras had now offered himself and his chapter to the Chaos God Khorne, and pledged his very soul to the Blood God. Motivated and strengthened by a terrible Daemon of Khorne that was imprisoned for the longest time within the Maledictum. With the Daemon's aid, Azariah Kyras orchestrated every conflict that befell the sector of Aurelia: the Tyranid incursion and the Black Crusade of Araghast the Pillager and Eliphas the Inheritor. The billions slain by these attacks served only to glorify Khorne and placed Azariah firmly on the path to darkness.

All this culminated in the arrival of the Inquisiton, the Ordo Malleus. The destruction they would visit on the sector through Exterminatus was what Kyras had always intended. The sheer death of such an act would a most grandiose sacrifice that would elevate Azariah to such power that few forces in the galaxy could possibly stand against him. Though, during the events of the Aurelian Crusade, a handful of heroes uncovered the truth of Kyras' treachery, in response, he branded them as renegades and sent forth his greatest champion, Apollo Diomedes to arrest these 'traitors'. Though his efforts were ultimately in vain, and Diomdes was gradually shown the truth of Kyras' evil. Thus, Kyras found his greatest champion turned into one of his great enemies. But it mattered little to the madman, victory was within his grasp at last.

Kyras retired to the Dead World of Cyrene and fed off the death of the other worlds, eventually, the time came for his unholy Ascension, merging with the Daemon in a pool of flaming blood, he arose as a Daemon Prince of Khorne. His final fate, however, was one of defeat at the hands of the races who fought for the control of Aurelia. 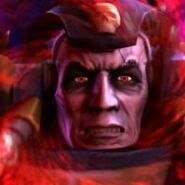 Daemon form
Add a photo to this gallery
Retrieved from "https://dow.fandom.com/wiki/Azariah_Kyras?oldid=39233"
Community content is available under CC-BY-SA unless otherwise noted.